Grandmother was pretending to be lost in prayer, but her prayer-beads
were spinning at top speed. That meant she was either excited or upset.
Mother put the receiver down. "Some American girl in his office, she's
coming to stay with us for a week." She sounded as if she had a deep
foreboding. Father had no such doubt. He knew the worst was to come. He
had been matching horoscopes for a year, but my brother Vivek had found
a million excuses for not being able to visit India, call any of the
chosen Iyer girls, or in any other way advance father's cause. Father
always wore four parallel lines of sacred ash on his forehead. Now there
were eight, so deep were the furrows of worry on his forehead. I sat in
a corner, supposedly lost in a book, but furiously text-messaging my
brother with a vivid description of the scene before me.


A few days later I stood outside the airport with father. He tried not
to look directly at any American woman going past, and held up the card
reading "Barbara". Finally a large woman stepped out, waved wildly and
shouted "Hiiii! Mr. Aayyyezh, how ARE you?" Everyone turned and looked
at us. Father shrank visibly before my eyes. Barbara took three long
steps and covered father in a tight embrace. Father's jiggling out of it
was too funny to watch. I could hear him whispering "Shiva shiva!". She
shouted "you must be Vijaantee?" "Yes, Vyjayanthi" I said with a smile.
I imagined little half-Indian children calling me "Vijaantee aunty!".
Suddenly, my colorless existence in Madurai had perked up. For at least
the next one week, life promised to be quite exciting.


Soon we were eating lunch at home. Barbara had changed into an even
shorter skirt. The low neckline of her blouse was just in line with
father's eyes. He was glaring at mother as if she had conjured up
Barbara just to torture him. Barbara was asking "You only have
vegetarian food? Always??" as if the idea was shocking to her. "You know
what really goes well with Indian food, especially chicken? Indian
beer!" she said with a pleasant smile, seemingly oblivious to the
apoplexy of the gentleman in front of her, or the choking sounds coming
from mother. I had to quickly duck under the table to hide my giggles.


Everyone tried to get the facts without asking the one question on all
our minds: What was the exact nature of the relationship between Vivek
and Barbara? She brought out a laptop computer. "I have some pictures of
Vivek" she said. All of us crowded around her. The first picture was
quite innocuous. Vivek was wearing shorts, and standing alone on the
beach. In the next photo, he had Barbara draped all over him. She was
wearing a skimpy bikini and leaning across, with her hand lovingly
circling his neck. Father got up, and flicked the towel off his
shoulder. It was a gesture we in the family had learned to fear. He
literally ran to the door and went out. Barbara said "It must be hard
for Mr. Aayyezh. He must be missing his son." We didn't have the heart
to tell her that if said son had been within reach, father would have
lovingly wrung his neck.


My parents and grandmother apparently had reached an unspoken agreement.
They would deal with Vivek later. Right now Barbara was a foreigner, a
lone woman, and needed to be treated as an honored guest. It must be
said that Barbara didn't make that one bit easy. Soon mother wore a
perpetual frown. Father looked as though he could use some of that
famous Indian beer.


Vivek had said he would be in a conference in Guatemala all week, and
would be off both phone and email. But Barbara had long lovey-dovey
conversations with two other men, one man named Steve and another named
Keith. The rest of us strained to hear every interesting word. "I miss
you!" she said to both. She also kept talking with us about Vivek, and
about the places they'd visited together. She had pictures to prove it,
too. It was all very confusing.


This was the best play I'd watched in a long time. It was even better
than the day my cousin ran away with a Telugu Christian girl. My aunt
had come howling through the door, though I noticed that she made it to
the plushest sofa before falling in a faint. Father said that if it had
been his child, the door would have been forever shut in his face. Aunt
promptly revived and said "You'll know when it is your child!" How my
aunt would rejoice if she knew of Barbara!


On day five of her visit, the family awoke to the awful sound of
Barbara's retching. The bathroom door was shut, the water was running,
but far louder was the sound of Barbara crying and throwing up at the
same time. Mother and grandmother exchanged ominous glances. Barbara
came out, and her face was red. "I don't know why", she said, "I feel
queasy in the mornings now." If she had seen as many Indian movies as
I'd seen, she'd know why. Mother was standing as if turned to stone. Was
she supposed to react with the compassion reserved for pregnant women?
With the criticism reserved for pregnant unmarried women? With the fear
reserved for pregnant unmarried foreign women who could embroil one's
son in a paternity suit? Mother, who navigated familiar flows of married
life with the skill of a champion oarsman, now seemed completely taken
off her moorings. She seemed to hope that if she didn't react it might
all disappear like a bad dream.


I made a mental note to not leave home at all for the next week.
Whatever my parents would say to Vivek when they finally got a-hold of
him would be too interesting to miss. But they never got a chance. The
day Barbara was to leave, we got a terse email from Vivek. "Sorry, still
stuck in Guatemala. Just wanted to mention, another friend of mine,
Sameera Sheikh, needs a place to stay. She'll fly in from Hyderabad
tomorrow at 10am. Sorry for the trouble."


So there we were, father and I, with a board saying "Sameera". At last a
pretty young woman in salwar-khameez saw the board, gave the smallest of
smiles, and walked quietly towards us. When she did 'Namaste' to father,
I thought I saw his eyes mist up. She took my hand in the friendliest
way and said "Hello, Vyjayanthi, I've heard so much about you." I fell
in love with her. In the car father was unusually friendly. She and
Vivek had been in the same group of friends in Ohio University. She now
worked as a Child Psychologist.


She didn't seem to be too bad at family psychology either. She took out
a shawl for grandmother, a saree for mother and Hyderabadi bangles for
me. "Just some small things. I have to meet a professor at Madurai
university, and it's so nice of you to let me stay" she said. Everyone
cheered up. Even grandmother smiled. At lunch she said "This is so nice.
When I make sambar, it comes out like chole, and my chole tastes just
like sambar". Mother was smiling. "Oh just watch for 2 days, you'll pick
it up." Grandmother had never allowed a muslim to enter the kitchen. But
mother seemed to have taken charge, and decided she would bring in who
ever she felt was worthy. Sameera circumspectly stayed out of the puja
room, but on the third day, I was stunned to see father inviting her in
and telling her which idols had come to him from his father. "God is
one" he said. Sameera nodded sagely.


By the fifth day, I could see the thought forming in the family's
collective brains. If this fellow had to choose his own bride, why
couldn't it be someone like Sameera? On the sixth day, when Vivek called
from the airport saying he had cut short his Gautemala trip and was on
his way home, all had a million things to discuss with him. He arrived
by taxi at a time when Sameera had gone to the University. "So, how was
Barbara's visit?" he asked blithely. "How do you know her?" mother asked
sternly. "She's my secretary" he said. "She works very hard, and she'll
do anything to help." He turned and winked at me. Oh, I got the plot
now! By the time Sameera returned home that evening, it was almost as if
her joining the family was the elders' idea. "Don't worry about
anything", they said, "we'll talk with your parents." 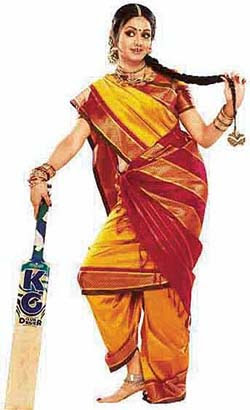